I’ve enjoyed my internship and I’ve learned many duties of a production assistant. I’ve enhanced my editing skills and I’ve learned how tonier new software. I was shown how to perform camera operations for news broadcasts as well as how to use an audio board. New software I learned how to use includes Premier and After Effects. My internship was fairly short, being that it was only for the summer semester. However, I still feel as if I learned a great deal. I gained much insight into how broadcast news works and how fast paced it is. I look forward to using the skills I’ve learned to pursue a career in broadcast news. 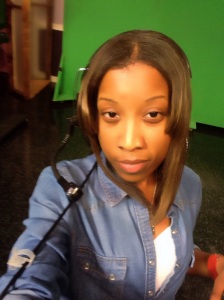 I’ve continued to edit television promos, film the evening/nightly news, and the sports show. I edited more radio promos this past week. The radio promos are edited using Premier. I’m not too familiar with the Premier software, so I consider this a new experience. I’ve only used Premier once, and I was assisted at the time. I’ve pretty much performed the duties of a production assistant, with the exception of a few tasks such as working the audio sound board. Being that I’m entering the last week of my internship, I hope to learn more about audio!

My duties the previous week still focused on filming and editing. I continued to edit television and radio promos, and film the evening and nightly news. However, I did learn new skills in filming. Usually filming the news broadcasts just requires me to focus on the anchors correctly. I have to position the cameras to get a good shot of the anchors and meteorologists. Now, WLTZ is filming for a new sports show. Filming for the sports show is different than filming news broadcast. The sports show requires more camera movement and following of the hosts.

Even though I still performed camera operations last week, I learned a new aspect of the task. I feel that I’m gaining new experience that will allow me to not be limited to just new production. 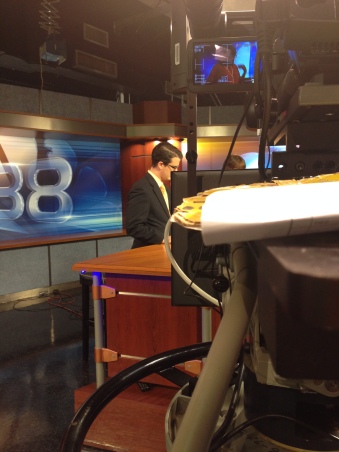 I’m getting much practice in editing and filming. Hopefully, this week, I will be introduced to new software and skills. 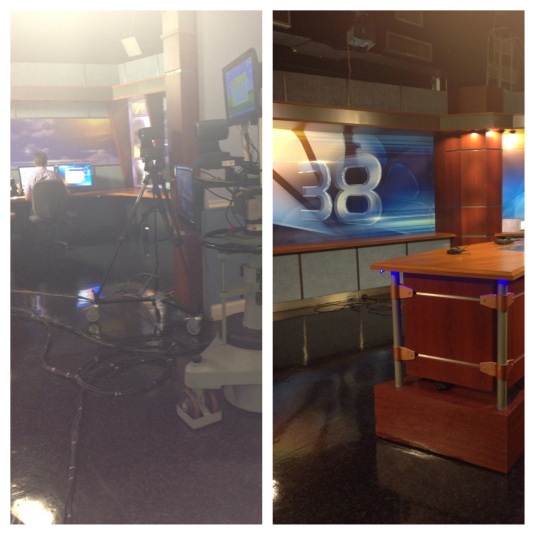 This past week at WLTZ was all about filming for the evening and nightly news. When I get to the station in the afternoons, I still edit the television promos for both First News at 6pm and also for the Alabama station. In addition, I performed camera operations for the evening and nightly news. This week marked the first week operating the cameras without assistance. The 6pm news is live and the 11pm (nightly news) is filmed earlier. One thing about the nightly news is if someone messes up (including me), we can record again. The evening news is live, and therefore, I was nervous and afraid I would do something incorrectly. I managed to film both broadcasts successfully.

This past week, I learned first-hand just how fast paced a broadcast news environment is. Individuals that work in television production have to pay close attention to detail. While operating the camera, I was given instructions on what to do from the operations manager via headset. I could also hear other through the headset, such as audio/sound operators and other people that assist the operations manager. With so much interaction, I now know that paying close attention to instructions is a must in news production.

The second week of my internship included more editing of news promos and filming for news broadcasts. I was allowed to edit television promos without any assistance. The promos were seen between shows during the evenings. Last week was also the first time I ever filmed the news. I operated the camera for the broadcast.

Operating the camera is not like I thought it would be. It requires me to move and position the camera quickly. I’ve learned that news production is very fast paced. During filming, I listened to the instructions of the producer/operations manager via headphones. He was in a different location operating a tricaster and other equipment. He gave instructions on where to position the camera, and how to focus.

I also managed to effectively use cue cards during the weather segment of the news. I held up the cue cards at the instruction of the operations manager. Last week was exciting because I was able to perform tasks that i previously had no knowledge of. This week is to be a continuation of what I’ve already learned and hopefully news skills be be added. 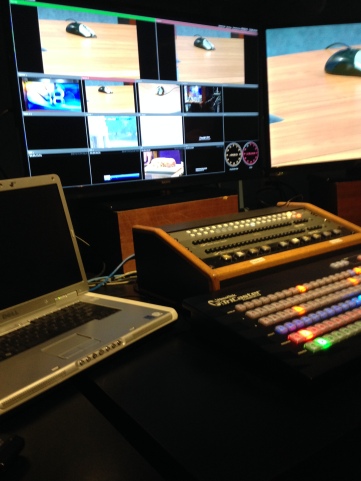 I began my internship with WLTZ NBC 38 June 16th. During my first week interning, I was shown how to edit television and radio promos. I used Final Cut Pro to edit the promos. After completing the television promos, I was able to see them on television between commercials. The radio promos were sent to Clear Channel Radio. I also edited graphics, Graphics are displayed while news stories are being broadcast. For example, if  a news anchor is talking about a suspect police are looking for, a graphic and description of the suspect may appear on the screen while the story is being told. Such graphics is what I was taught how to edit.

I was also shown how to use an audio board. The  audio board used to adjust mic  volume and and to adjust sound. The majority of the time, the producer or operations manager gives instructions on when to adjust the mic volume or fade/increase background music.

I was shown the basic in many areas of the news station during my first week interning. I’m looking forward to the following weeks because I will be assisting in the production of a new sports show!