With the official launch of NPACE center last week, the communication department is stepping into the next chapter of its history. I spent the majority of the day showing visitors our Tricaster-based video studio and everyone was shocked to find out that technology of this caliber was located in the bottom of the Carpenter’s Building. With our radio and TV studio’s, the communication department is going to be able to reach far and wide across the region and even the globe as we stream online as well. 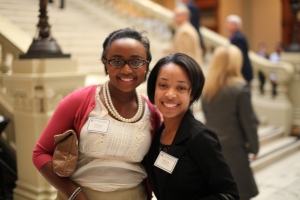 Laterika Peak and Latisha Francis at the Georgia Capitol

It seems that everywhere I go now it is inevitable that I will run into a communication major doing something to help contribute to the University and the community. A couple of weeks ago, I was one of many communication majors who traveled to the capitol to help show legislators why we are such a good institution. Hopefully, my fellow peers won’t mind me posting this picture I took of them up at the Capitol Building. It’s just such a good picture that I had to share.
Another place you can find Communication majors these days is at CSU TV up on main campus where I am doing part of my internship. While I don’t personally have any pictures from recently in the studio, I’m sure you can see one from Mark’s post this week. He and many other Communication majors have been helping us at CSU TV develop some student programing, something that I’ve been waiting a long time for. We hope to have shows that talk about student issues, deliver news to people on campus, and share some of the exciting things that go on at Columbus State University. My role thus far has been that of the technical situation. I’ve been making sure everything is working properly, looking good, and sounding clear. This week we had our first recording on student issues. Every week we’re making a little more progress towards the student programing of our University.

One last thing I should mention is the project in Roger Hart’s video production II class. I have been helping with the filming of a documentary on the Youth Orchestra of Greater Columbus. Last Saturday, we filmed their side-by-side performance with the Columbus Symphony Orchestra. It was such an experience to be in the Bill Heard Theater and get to hear talented musicians of all ages play. So far we have gotten a LOT of good material and I am really excited to see how the documentary turns out at the end of the semester. 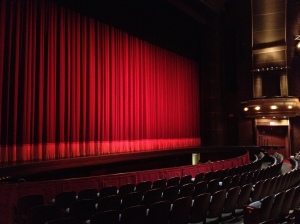 end of week three already this semester and things are busy as ever here at Columbus State. My internship with NPACE & CSU TV already has me doing cool things all over the city of Columbus. At the end of the first week I had already found myself video taping The Elixir of Love at the River Center. The opera was put together by our fellow friends at the Schwob School of Music. I was able to practice my live recording skills and try to capture the months of hard work by other students in the College of the Arts. 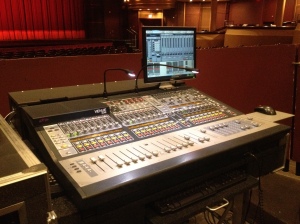 I would be lying though if I didn’t mention that one of my favorite parts (besides listening to the harp player practice before the show) was the Front of House audio mixer they had in there. Luckily, I was able to grab a shot of it so I could share it. This is a serious piece of equipment and I wouldn’t have been able to see it had it not been for the opportunity from my internship. Not to mention it was hard not to think about how nice one of those would look in my living room.

So, Jazmine and I were able to get a lot of material from the show even though there were only two of us and three cameras. The show itself was a great thing to record. At first, I was a little wary about having to sit through an opera and film it but it turned out to be a great performance by the actors/singers, and orchestra. I was certainly glad I was able to go and the footage we got turned out really nice. 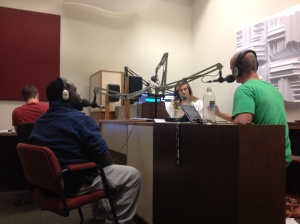 After we packed up and headed back to NPACE, a look in the window revealed some of our other interns getting their NPACE on as well. Friday Night Sports Focus was in full effect doing what they do best on the airwaves. I grabbed a sneak shot of them as you can see here. This is the NPACE Radio Station that is blooming out of nowhere thanks to people like them as well as our partners at PMB. On Febuary 14th, we’re going to be having our big kickoff down for the radio station so be sure to keep an eye out (or an ear I should say).

Not only am I interning at NPACE but also at the very soon to be CSU TV which is headquartered up on main campus. Formally known as COEHP.tv, I have worked here for two years and am now getting to do part of my internship as the project  has a metamorphosis into the television station for the entire campus. As you may or may not know NPaCE also has a studio built on the same model as that of CSU TV. I’m looking forward to helping both of these projects collab 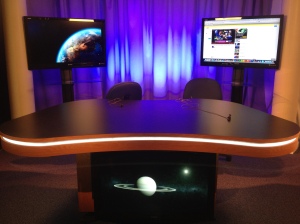 orate with each other and build another outlet for the Communication Department as well as the University as a whole. In this last picture, you can see the set from one of our shows TWiSS which stands for This Week in Space Science. The show is hosted by CSU’s own Dr. Shawn Cruzen, director of the Coca-Cola Space Science Center. All week I worked on making this set work for our recording on Thursday. As you can see from the picture, there are NO WIRES on the ground. That’s a major accomplishment if I do say so myself. Also we were able to do the show with no green screen which in my opinion made it look extremely clean. Dr. Cruzen came in and put on a great show which should be up right after we edit it. He talked about all of the exciting things they are doing down there at the Space Science Center (just a stone’s throw from NPACE) and believe me they are exciting. Not to get to into it but one of the topics was the transit of Venus that happened this past summer. The Science Center sent teams all over the world to capture and document this once in a lifetime astrological event. You’ll have to tune into the show to get the rest of the details.

Anyway, a lot has gone on in these last few weeks and this is just the tip of the iceberg. I can’t wait to watch both NPACE and CSU TV grow over the course of the semester while being able to be involved. This is going to be a big one for both of them in Spring 2013 so keep tuned!