This weekend, I did a lot of writing. I worked with a WTVM Producer and news reporter. I was introduced to the wire which holds WTVM’s associated press releases updated frequently.

I was able to go through a long list of associated press releases and choose news specifically for the Georgia area and use it as a form of practice.
Ms. Dionne also let me write an introduction to her news segment.
Basically, the introduction is what the news anchor reads to introduce Ms. Dionne. It’s absolutely fabulous to have hands-on experience that becomes reality before your eyes.

Needless to say what I wrote was decent, but practice does make perfect, so I will continue

to practice to one day reach perfect. Ms. Dionne took what I wrote and showed me how to make it better and more relevant.

My Intro: During the Nation’s biggest shopping weekend… Small Business Saturday is a great opportunity to support your local retailers…Its a time when shopping small is a BIG way to contribute to your local community…

My Intro Perfected: The Nation’s biggest shopping weekend is well underway…And right now many are shopping small to give back in a BIG way. News Leader 9’s Brittany Dionne hit the stores for a fun day of shopping.

This weekend was interesting, it started off with attending the Funeral of Reverend Flakes, a well-known Pastor of the Columbus, Georgia area.

Coverage for Reverend Flakes funeral was very important, in fact we were in a hurry to arrive and get inside coverage as well as live coverage outside. We waited approximately 4 hours for the funeral to end.

Columbus, Georgia and Seale, Alabama, the Congressman and so on.  Hundreds of people lined up outside waiting to get in.

Today was my first time witnessing first hand the process of producing a live shot. The reporter had her laptop so that she could edit and prepare her package as well.

We also visited the local Salvation Army, where local organizations had prepared hot meals for the homeless. It was an early Thanksgiving celebration. We interviewed homeless people who were very happy and thankful for the meal. The Mason and Eastern Star organization expressed that they were happy to give and provide meals for the underserved of Columbus, Georgia.

One thing that has been made very clear to me during this internship, is that reporters have a lot of work to accomplish in very few hours.

I met Ms. Dionne at Recorders court, where she allowed me to set up the tripod and camera. She explained to me the information

she was there to gather; the witnesses did not show up-court was postponed until Tuesday. We still recorded footage to report on the evening news.

We then went to the Habitat for Humanity to cover the yard sale. I observed Ms. Dionne conduct interviews of the Director and a consumer. We took B-roll and we recorded natural sound (NAT’s).  After we left the Habitat for

Humanity center we went to the Holy Family church to cover the memorial for Mr. Richard Halford-the policeman who died in a helicopter crash while searching for a young man in Atlanta. Ms. Dionne conducted an interview with the family and also recorded B-roll.

With each event and each step Ms. Dionne taught me the importance of camera angles, questions, natural sounds and bringing energy to the interview. After we left the memorial we

went to the police station to look at the police reports for aggravated assault and other interesting news-which led us to a local residence to record B-roll of where an assault and break-in took place. There were two young men who verified the story, but did not want to be on camera.

We then went to Gorilla Guitars to interview and record B-roll for the Re-string food drive. At this event Ms. Dionne let me set up the camera, record natural sound, and begin the interview process, of course I am

not as good as she is and she stepped in to assist me with questions and the different shots needed to make the interview successful. We then went back to the station where, Ms. Dionne gave me a homework assignment to write voice-overs and sound on tape for each story and she will review when I return.

Until next time, think on this…”The only disability in life is a bad attitude.” ~ JimmyScott Hamilton

Sweeps is a term used to describe television ratings.

What are “sweeps”?  Sweeps are time periods when television stations/networks typically schedule programming designed to attract a larger than usual audience

Why?  Sweep period programming is designed to attract larger audiences who in turn are exposed to advertising commercial messages. Thus, when the ratings for the sweeps period are revealed, the TV station/network can charge its advertisers more money because more people watched.

When do sweeps occur?  Typically four times a year: the months of February, May, July and November. You can find additional information concerning sweeps at http://www.frankwbaker.com/sweeps.htm.

Mr. McCould a News reporter at WTVM Channel 9 is working on featuring and highlighting local artists and their perspective concerning the impact of social media with their music. While Ms. Brittany Dionne attended Recorders court, I learned about the importance of sweeps.

Untill Next time think on this….Failures are made only by those who fail to dare, not by those who dare to fail. ~Lester B. Pearson

I have nothing but GREAT things to report about WTVM channel 9. 1st lesson I learned this past Friday is always come compared for anything! I arrived dressed in business casual clothing, but Video Journalist Brittany Dionne’s story by the Chattahoochee River called for rubber boots. Needless to say the lesson learned is always bring a change of clothes and shoes.  Brittany was also dressed in business casual but she like a true professional was prepared with rubber boots in her trunk.

Area students and local volunteers were preparing the Chattahoochee River for the up and coming white water course. They found some interesting treasures while cleaning, and reported they were proud to be assisting in something great. After recording interviews and shooting B-roll it was time to return to the station to produce the package for the evening news.

Brittany gave me the opportunity to write several introductions for the News anchors that would be introducing her segment. I typed them up; it was harder than I thought it would be. News Anchors and Reporter always aim to speak simple language that is easily understandable yet compelling. The compelling part was the hardest part. Brittany reviewed and actually used some of what typed. Which was awesome. She is definitely an expert and expressed that practice makes perfect.After writing introductions and voice overs. I observed Brittany editing her video-preparing the final package for the 6:00pm segment. Its a lot of work,  and time consuming. If you can see the photo well enough, you can see the two screens. One holds the video and the other is the  editing system used by WTVM. This system creates

Finally we go the sound room, where Brittany records her voice overs. She states “track 123,” before and in between each new statement. The producer gives her approximately 1 minute and 30 seconds to present her package. Brittany assured me its fine if the time is below 1 minute and 30 seconds, and that it is necessary to ask for permission if it goes over. Until next time think about this….

The mind is like a clock that is constantly running down. It has to be wound up daily with good thoughts.” ~  Fulton J. Sheen

My first full day at WTVM Channel 9 began Friday at 10 am and ended at 6pm. It went by so fast and did not feel like work at all. I thoroughly enjoyed myself. I had the opportunity to listen in on the morning meeting.  After the meeting, I was introduced to Brittany, the Video Journalist I would be shadowing for the duration of my internship. Brittany had a few stories she was working on, which led us to visit a man’s house in Phenix City, Alabama. Brittany allowed me to record her interview. I did not get a chance to record very much, because the man mentioned that he did not want to be on television . So I had to turn off the camera. All of this was so exciting for me.  We went a few other places to get different perspectives of the story, and then went back to the newsroom where Brittany began editing and preparing her package, which is another word for story. I was able to go into the sound room with her while she recorded her voice-overs. I also watched her present the news live for her segment of the show concerning the news she had gathered and prepared that morning. 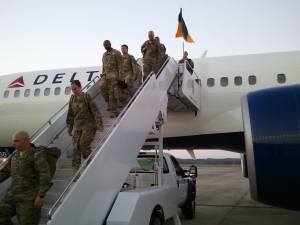 Saturday morning we had to be at the station at 6:30 a.m. to prepare for covering the return of Soldiers from Afghanistan. We met the Fort Benning Public Affairs Officer at the front gate along with other news affiliates. We then convoyed to the site where the Soldiers would return and where eager families were waiting to see their Soldiers. There was so much positive energy and excitement in the air. This unit returned home with zero deaths. This was a serious event for Brittany and I was able to see first hand her professionalism, assertiveness and drive to do her very best to get a story her audience could identify and connect with. Brittany is shorter than I am, and I was practically running to keep up with her on several occasions. With all of this going on and the importance of getting her story, Brittany was still cognitive of the fact of me being with her and ensured that she was teaching me and giving me guidance every step of the way. After this event we went to another event. 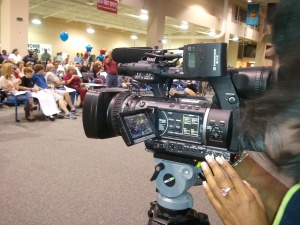 The Annual Buddy walk, where Brittany allowed me to record the entire event. I taped interviews, and B-roll during this event. It is great getting hands-on training from an expert. We then went back to the news station where she taught me how to pick out the important personal part of the story, and I became familiar with EDIUS the software used at WTVM to enter packages voice-overs and sound on tape.  Overall I had a fabulous experience. What I love most about the profession is the opportunity to meet new people everyday. There never seems to be a dull redundant moment.

Until next time keep this in mind… “Anyone who stops learning is old, whether at twenty or eighty. Anyone who keeps learning stays young. The greatest thing in life is to keep your mind young.” ~ Henry Ford

Application is complete, and we are scheduled to visit the WTVM channel 9 Station Tuesday October 2, 2012. So EXCITED!!!

Hopefully my next blog will specifically detail my internship experience!!!

Until next time keep this in mind…Think positively and masterfully, with confidence and faith, and life becomes more secure, more fraught with action, richer in achievement and experience.
~Eddie Rickenbacker