We are just 2 weeks away from the steeplechase and I am beyond excited about it! Last week I went with the General Manager and the Executive Director and we went to PMB broadcasting. We ended up being on 3 radio stations, 1 live and 2 recorded. By far my favorite of the three was the live broadcast because it allowed me to talk impromptu about the steeplechase and working with the women of the steeplechase. we joked around for a minute on air and were able to talk about steeplechase in real time, which was an experience. The recording sessions were  interesting in their own right. the first one, the radio personality was quite humorous, and kept us entertained while the second was more structured and information based.

Another thing I was able to accomplish was updating and creating a webpage for the leadership of the steeplechase. I have never actually changed a website before and this was a great experience for me.

Alright, so this week was super-insane-crazy-awesome!
Tuesday and Thursday, I helped Dave out with his show. Also, I got to help Gator out with some of the usual stuff. The thing that stood out Thursday was we were all listening to a station that the company that owns our station also owns. They had some great liners (the things in between songs/people talking that have explosions/weird noises/sounds/etc. and say the name of the station and have a catch phrase or something along those lines). So, we got to talking and Dave said that the station gets their interns to work on a lot of the promos and liners, etc. I saw this as my chance to yell “I’ve been telling you guys to let me write the greatest liner of all time!”

So, now I have been given that task.

Next week, I will embark on the creation of a liner so delicious, Gordon Ramsey won’t be able to touch it!

Today was especially fun, because, I officially voice tracked 5 hours. From 9 AM – 2 PM – I, Hudson Myles Thompson, will be on 100.9 WCJM The Bull! 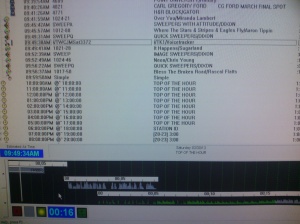 Finishing up voice tracking the 9:00 hour

I see different DJ’s voice-tracking and I guess it is because I am usually busy with other things, but I don’t notice them taking a long time. But, I know this, it felt like it took me a while to finish those 5 hours. Regardless, it was awesome, and I am stoked to do it again!

If any of you guys get the chance to listen to the station, it is 100.9. And, I’ll be on from 9 AM – 2 PM. It is definitely not my style of music and I had fun with that (mispronouncing names, talking about bands I know nothing about)! But, I had a good time, nonetheless!

This week at WCJM was awesome because I got to participate in sales!

I’ve been there for weeks and the one branch of radio I feel I have not gotten to get into was sales, so I asked Steve Wheeler, our station manager, if I could go out and participate in that. He said yes, so Friday, I got all dressed up and went out with Dr. Dave. He is a DJ here that also does sales, just like Smoot. There is also Mike, whom I have never mentioned, that works at the Bull who is strictly sales. And, lastly, Gator  is the production manager.

Friday, I was able to go out and participate in sales with Dave. The first place we went to was the new Merle Norman in Valley, Alabama. They have done advertising with us in the past a few times, and plan on doing it in the future. Now, that of course was mentioned in the 20+ minutes we were there, but what I found out Dave’s approach is – he likes to talk and make people feel comfortable. He talked about what was going on in his life lately, he told her about his niece and other recent happenings, etc.

After we left he told me that for him, sales is really is about finding common ground with people and making them feel comfortable. I applied what I am learning in my Intro to PR class and we talked about how one must maintain old relationships while also starting new ones with new clientele. We also got to talk to some potential new clientele in Valley at Jin Express for a moment before we were basically shot down and he told us, “I’ll talk to Smoot.” This is something Dave said to never get offended by or worry about, because this happens all the time – some people want to deal with a certain person or could even NOT want to deal with you because of some other person. It is just the way it is in small town radio.

It was a fun and interesting time, and I could feasibly see myself working in sales!

I am in my seventh week at the Radio station, 100.9 “The Bull.” It has been a good week, though I am not sure if it is because I have been looking forward to having a week off of school and everything just kind of flew by, or if it was because I legitimately had a good week.

But, this week at The Bull was filled with good information, for sure! This Tuesday, I did the usual. I ripped music trying to get it all done for the sister station. That is all I got accomplished that day. Then Thursday rolled around and I got to assist Dr. Dave with his show! He is the DJ from11-3 (I believe it starts at 11, though it might be earlier). He is a really funny guy, and fun to work with; he’s definitely a jokester, so we get along swimmingly! He voice tracked his show, which is when someone records the vocal tracks (for in between songs and bits before their section that day). I helped him find material for his show – news, updates, interesting stories. I also helped him put a bit together which was fun, and hilarious!

On Friday, I finished ripping in the CD’s I was handed at the beginning of this venture! From here on out I will just rip in little things here and there Johnny Hill (DJ at the sister station) wants/needs. I got the oaky from Steve Wheeler, station manager, to assist others and make commercials on my own. And, that is something I am stoked about because the production part of the radio business is something that has definitely sparked my interest and will be fun, no doubt!

I also helped out Gator as usual, with his Friday schedule of making sure Saturday, Sunday and Monday’s music/commercial/show schedules are laid out and ready to go!

Lastly, I have been told that the station will be making a Harlem Shake video… I am not 100% sure why we are doing it… All I know is I will be wearing the green morphsuit and it will be insane. I will post the video once we do it. I’m pumped!

It is week five here at the radio station. Probably my favorite week so far!! I got to do some really fun stuff!

This Tuesday was fairly uneventful, other than the fact that I made a lot of progress on ripping music for the A.M. sister station. I am very close to being done with that, finally.

This Thursday, which was Valentine’s Day, was the most fun I have had at the station so far. I came in super early to watch Steve Smoot do his morning radio show. Little did I know, he had no real plan for me, so I got to join him on the show. I was there the whole time and we took phone calls from people doing shout outs to their Valentines, birthdays, etc. We also had a lot of people calling in just to talk. We had other people from the station come and join us. We had 4-5 people in the station on at one time, occasionally. While all this was taking place, my phone was blowing up with text messages from people who were listening to me on the radio. It was very fun and intense! The whole day I had people telling me they had heard me on the radio – from people at the gym to my mom telling me she had people calling and texting her. I felt like a local celebrity … It was intense!

On a side note, Smoot said that was the most fun he’d had on the show in a long time. It was an ego/pride boost for me!

This is Smoot. This is also right before I got on the mic to join in…

Today, there was a satellite taking place and I got to “run the board” for a little while which was fun. Also, now that I know how to do that, I will be doing that a lot more, which is great, because learning how to use the soundboard is crucial in the radio business!

So, it was an eventful week, for sure!

This is my fourth week here at WCJM The Bull, where they play “the biggest hits by the biggest stars.”

This week brought many new opportunities for me. I got the chance to toy around a little bit with the software they use to create the commercials, and ended up making a commercial for a local body shop. I was able to choose the background music and then play with it until I got it how I wanted it to sound. I also learned how to edit the voice track to where certain parts were emphasized with echo, etc. After that, I was able to dub that in as well as many other commercials. 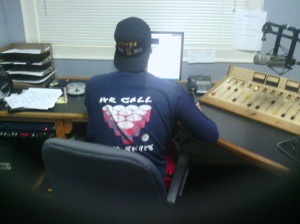 Here I am dubbing in my commercial!

One interesting thing that happened this week was that two of our DJ’s went to a Point University baseball game while the rest of us stayed and manned the station. It was interesting to see how the live feed worked. They would cover the game, say they were taking a minute break, and we would (from the station) go to a commercial or a liner, then go back to them when the next inning started, or whenever they took a break. 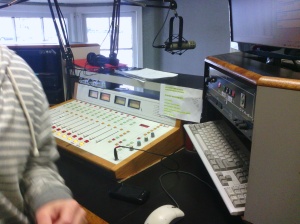 Here is the board we were working from…

One thing I am looking forward to in the coming weeks is that I will  be starting to work on Tuesdays and Thursdays to observe/assist/learn from the morning DJ, Steve Smoot. I think he will be fun and interesting to work with!

It’s my third week in here at the WCJM, The Bull. Some interesting things came up this week. The man who is teaching me everything I need to know to be able to function at a radio station, “Gator” talked to Cindy Lauper about her upcoming show on Women’s Entertainment. It was a conversation I was able to listen in on, which was fun and it was interesting to see how he conducted a radio interview.

This is Gator doing the interview…

This week, I was able to help out with the editing and cutting down the phone interview into something we could put on the air.

We did this with editing software, and it was fun to compress a 7-10 minute long conversation into a 1 minute “news story”!

Another thing I got to play around with was dubbing in commercials. I would take commercials that are needed to be put on the air from the computer  and put them into the system (that in turn plays whatever on the air). It is my job to make sure the levels are all correct. You do not want a commercial turned down really low, then the next commercial blowing up people’s car speakers.

I am still working on converting the CD’s to digital music with the station in the back. Hopefully I will be able to wrap that up in a few weeks.