The greater Columbus area has recently been undergoing some news changes in the Muscogee County School District. With the recent decision to close Marshall Middle School and Edgewood Elementary Schools for the 2013- 2014 school year it is clear that changes have to be made in the district. One of the changes that will be implemented is the placing of former Marshall Middle School Principal Dr. Michael Forte at Rothschild Middle School. He will lead and serve Rothschild Middle School as their new Principal. Therefore as I have the privilege to shadow Veteran Reporter Curtis McCloud I get the opportunity to learn more and more. So this particular day we had a game plan to get some information from Dr. Forte about his new position. We got on the phone with Dr. Forte and he gave us a great statement about the upcoming school year. He seemed very thrilled to be working with the students and staff of Rothschild Middle School and we were excited to jump into this story.

After we received his statement Curtis wanted to go out to the School to shoot some footage and also to get the opinions of the students and parents about Dr. Forte being a new addition to Rothschild. As we arrived at the school we were in search for students or parents that would be happy to share their opinions about the new leadership for the upcoming school year. We began to look and parents and students had left for the day however, Curtis did not let that discourage him. We decided to drive around the neighborhood to see if we could discover someone else to be a part of our story. As we circled the block we came across a woman in her yard and we inquired about her opinion on the situation and she was willing to be interviewed.

I thought it was amazing how Curtis just continued to search for a viable person for the interview because one must always deliver a full package. This woman was actually the aunt of a student that attends Rothschild and she had great insight into the new position because she actually worked in the school system as well. Her perspective provided the truth because she mentioned that the kids would have to get used to Dr. Forte before any major changes in the school would take place. She also told us that she thinks it will be a good thing for the school.

After we left her house we ventured back to Rothschild to shoot a live shot right in front of the school. This is always the fun part of the story to me because a reporter gets the opportunity to place their own spin into their story. I also got to shoot a live shot in front of Rothschild Middle School and it was definitely a great experience. I truly believe that this story was informative because it allowed the community to understand other changes that have been made in the School District. I know that Rothschild will have a successful school year and once again Curtis was able to interpret a package through his own creative lens that reached out to the viewers. I am really learning a great deal from him. 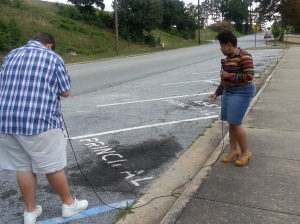