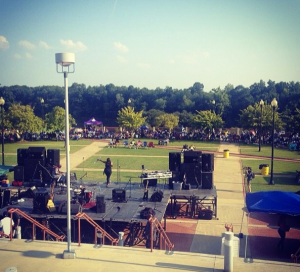 Jazz on the River was a success! I was glad to be apart of making this event possible! There were a lot of different people from all areas and age groups in attendance to the event. I arrived two hours prior to the event to help with set up, posting the stations logos and the events sponsors everywhere! I even was aloud to ride in the BMW that was brought to the event.

When the event was going on I was stationed at the winners tent where the on air winners received their VIP Michelob Ultra passes for the event. Most of the event I was able to enjoy the sweet sounds of jazz from the local and regional artist that came and performed live. It was also fun to network with the press that came to the event, WSBTV and The Ledger Inquire. I also assisted the station coordinator of the event with bringing all the acts to the stage at the proper times.

One act that performed was a band called “Unknown Lyric” they were a band from Atlanta Georgia that just played instruments no vocals which explains their name. They were the closers of the event and when they performed the crowd was raving in applause. It was really nice to be backstage and get to meet them!

When the event came to a close one of the other interns and I went around getting statements from people in attendance about their experience at the event, and their comments or concerns. Finally when the event came to a close the station team and I went around packing up all the banners equipment that we had brought and we thanked everyone that passed by for coming to the event and not to forget to come again next month.